Today (Monday, 9 March), we are launching our fifth bursary scheme giving police officers and staff across England and Wales the opportunity to apply for financial support towards their higher education fees.

Since 2016, we have provided funding to more than 200 police officers and staff from 42 forces, supporting study at undergraduate and postgraduate levels across a wide range of subjects including criminology, forensics, counter terrorism, investigation and psychology. The scheme supports those working towards degrees who have not studied since school, through to those taking PhDs on topics such as communication pathways in control rooms and emergency planning for counter terrorism. We are committed to supporting the continuing professional development of police officers and staff and particularly welcome applications from those working on the frontline.

PC Emma Pragnell, a forensic collision investigator from Hampshire Constabulary, is in her second year of a Master’s programme on Ergonomics (Human Factors) at the University of Derby. Emma completed a Foundation Degree in policing studies in 2011 and became interested in the Master’s course after doing some mandatory CPD for her role which included a short section about the human factors which impact on driving, such as inattention and unintended acceleration. Finding that there was not much published research on factors causing pedal errors with drivers, Emma decided to focus on that area for her own research. The early benefits of Emma’s course have already been clear. She has been able to apply her learning to a number of collision investigations, for example, using the psychology component of her course has helped her to understand how drivers may misjudge speed when pulling out of a junction. Emma has passed on her research knowledge about the human factors which influence road traffic incidents to the rest of her team. The support of Emma’s team and line manager has been an important factor for her in managing her studying while working; she advises bursary applicants to seek help from managers at an early stage:

For many, bursary-supported study has been their first experience of higher education. PC Maciej Matusiak joined Merseyside Police at the age of 30, having finished his studies at the age of 18 in Poland. He received a bursary in 2018 for the final year of - a BA in Policing Studies at Liverpool John Moores University. Maciej says that studying was very hard at the beginning, particularly as he was writing in a second language, but he stayed motivated and managed to fit studying in around shifts and family commitments. His dissertation research focused on domestic abuse in the Polish community and involved analysis of domestic homicide reviews of Polish nationals in the UK. Maciej has been particularly active in disseminating the findings of his research, with a view to influencing practice, including the way in which the Home Office capture homicide review data. He says that in sharing his research findings, he feels he is keeping the memory of the dead alive and giving them a voice.   Using the university’s Recognition of Prior Experience and Learning (RPL) Scheme, Maciej completed his studies in two years instead of three which also reduced his tuition fees significantly. Maciej has some advice for people thinking about studying and applying for a bursary:

A number of bursary recipients have used the College’s Recognition of Prior Experience and Learning Credit Estimator to identify how their learning and experience could be used to gain credits towards academic study. Universities sometimes require candidates to write about their learning from previous courses and policing experience as part of their application for RPL. Acting Detective Inspector Dan McCarthy, from Sussex Police used RPL to reduce his undergraduate degree in Applied Investigation from a three year programme to just one year. Rather than use the Credit Estimator, he discussed his previous experience as an investigator and the courses he’d completed in policing roles with course leaders at the University of Sunderland. He went on to carry out research on the impact of silence on the interviewer in ‘no comment’ or completely silent interviews and explored the psychological impact on the interviewers. March is a busy time of year for College staff and bursary applicants alike, and over the last three years we have received nearly 600 applications and have awarded just over 200 bursaries, making the scheme very competitive. Previous bursary recipients can also apply for a second round of funding to support longer programmes of study. Sergeant Lorna Dennison-Wilkins from Sussex Police received further funding last year to continue her doctoral studies into body recovery from water. Lorna said she was stunned when she was informed that she had been successful for a second time as she had recently returned to self-funding her studies and the bursary relieved these financial pressures. Lorna explained that she has developed a real passion for research and her subject area: To help you to apply, we have an ‘Information for applicants’ page which includes the application form, guidance on completing the form, frequently asked questions and monitoring forms. We have also added some tips for applying from previous successful bursary recipients. We will be sharing more tips from successful applicants throughout March to coincide with the application period. If you are a Twitter user, follow @CollegeofPolice for these tips. The deadline for applications is Monday 6 April 2020 for funding for the academic years 2020/21 and 2021/22.

Applications and enquiries should be sent to bursaryscheme@college.pnn.police.uk.

If you are already studying or thinking of studying, we also provide a number of services to support you: 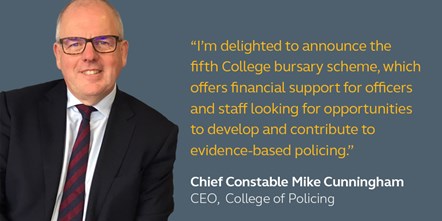 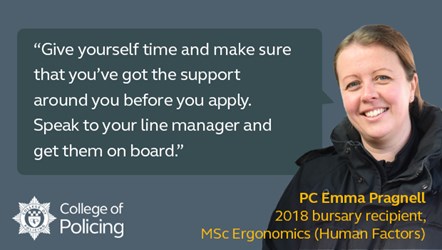 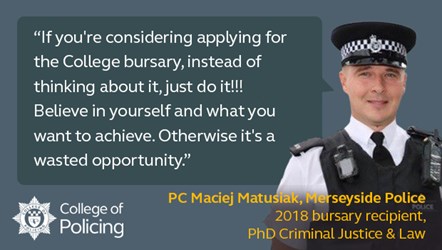 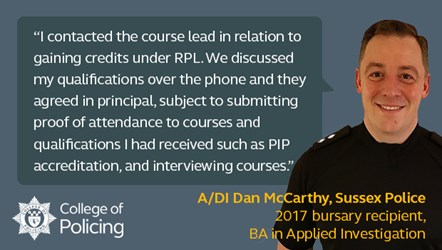 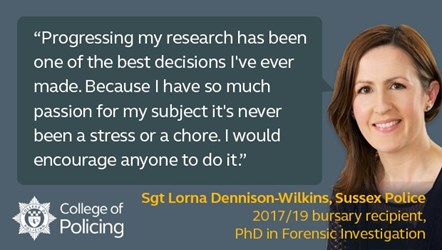